In February, there will be three different programmes.


*End times are estimates and could vary.
*Audio guide: Available for rent in English and Japanese. Click here for details.
*Subtitles: Available only in Japanese. Displayed on screen beside the stage.
*English synopsis is available. It is included in the paid Japanese program. 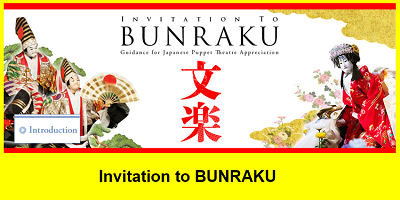 A View from the Stalls
(by Stuart Varnam-Atkin, Japanologist and writer)

Sugawara Denju Tenarai Kagami(Sugawara and the Secrets of Calligraphy)
The three programmes being performed in Tokyo in February offer a splendid selection of classic Bunraku themes, famous characters, and riveting scenes.
rogramme I presents four must-see scenes from an ever-popular five-act drama which was first performed as a puppet play in August 1746, with a Kabuki version appearing just one month later. A group of playwrights wove an intricate story loosely based on the life of the great ninth-century statesman and calligraphy master Sugawara Michizane, still revered nationwide at Tenjin shrines as the God of Learning.
Their masterstroke, inspired by topical news of triplets born in Osaka, was to include the triplet sons of one of Michizane’s retainers as the star characters working for three different masters. (‘The Three Brothers’ might have been a catchier title.) Another fine dramatic touch was to give them all different personalities and name them after Michizane’s favourite trees: the pine (Matsuōmaru), the cherry (Sakuramaru) and the plum (Umeōmaru). They are easy to recognize on stage as they appear in very different make-up and wear kimonos bearing the appropriate motifs, as in these prints of the Bunraku versions of Sakuramaru and Matsuōmaru. 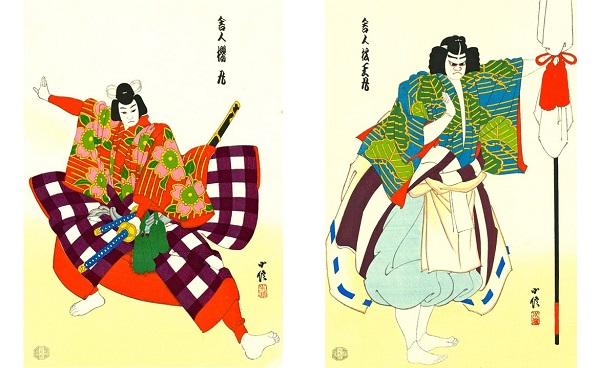 Shinpan Utazaimon(The New Scandalous Ballad of Osome and Hisamatsu)
Programme II presents two scenes from two different plays. First is the Nozaki Village scene from Shinpan Utazaimon, which has the splendid English title of The New Scandalous Ballad of Osome and Hisamatsu. Dating from 1780, it was one of various plays based on an actual double suicide committed by lovers with a very different social status.
It’s a heartbreaking story of a three-sided love affair, involving Osome, a wealthy oil-seller’s daughter, one of his humble employees named Hisamatsu, and his fiancée Omitsu, a country girl. Highlights are the scene in which Hisamatsu massages Kyūsaku, his father, and the famous final musical passage complete with a stage boat at the end.
Here are two more Konobu prints of Omitsu, Hisamatsu and Kyūsaku. 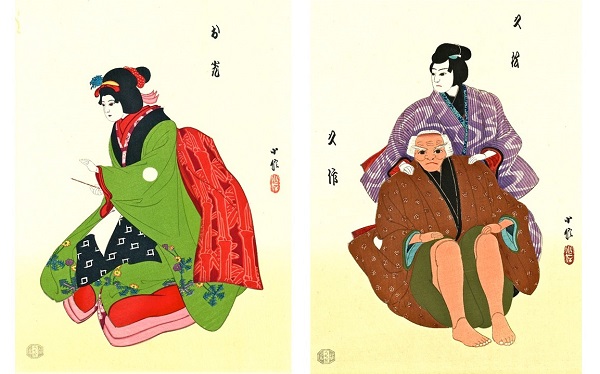 Keisei Hangonkō
(The Courtesan and the Resurrecting Incense)
The second part of Programme II is a famous scene from a play by the great playwright Chikamatsu Monzaemon which was first performed around 1708. The somewhat fantastic story involves: a stuttering artist named Matahei and his talkative wife Otoku; a tiger painting that comes to life; a princess in distress; and a portrait drawn on a stone washbasin to which something miraculous happens.
At the start, Matahei is only making a very modest living painting and selling Ōtsu-e pictures, but he is hoping to gain a prestigious artist’s name. Watch out for the amazing turn of events that changes Matahei’s apparently doomed life forever.
The unusual Ōtsu-e genre of simple humorous paintings was developed in Ōtsu, a post station on the Tokaido Highway near Kyoto. The pictures began as cheap Buddhist icons in the seventeenth century but later became popular as talismans and souvenirs for travellers. Particularly favoured for New Year display were amusing pictures of the Seven Gods of Good Fortune behaving like humans, such as Daikoku (the God of Prosperity) climbing a ladder to shave the towering head of Fukurokuju (the God of Longevity). Another familiar image was a demon with a crooked horn dressed like a wandering Buddhist priest, chanting badly and getting drunk. 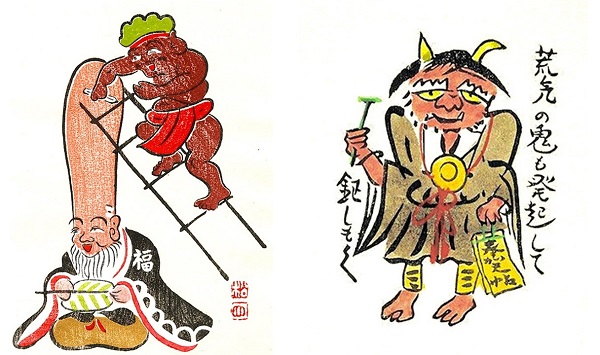 Keisei Koi Bikyaku(The Courtesan’s Love for the Courier)
Programme III begins with one of the sewamono (domestic plays) featuring the lives of ordinary people in the Edo period. It’s actually a 1773 reworking of the love-suicide play Meido no Hikyaku (The Courier of the Underworld) written by Chikamatsu Monzaemon in 1711. It was based on a real incident in Osaka the previous year when a courier was executed for using the money he was supposed to be transporting to a customer to buy the freedom of his courtesan lover.
Fugitives from justice, the courier named Chūbei and the courtesan named Umegawa trudge through the snow towards Ninokuchi, Chūbei’s home village, hoping for a brief time of happiness together…. A moving highlight is the blindfold scene before father and son part for ever. (Varnam-Atkin Collection)
Here we see the two lovers on the Kabuki stage as portrayed by Torii Kiyonaga in 1784, with Matsumoto Koshiro IV as Chūbei and Mimasu Tokujiro I as Umegawa. Note the two tayū narrators and shamisen player of the Tomimoto School visible behind them.

Narihibiku Ataka no Shinseki(The Famous New Barrier at Ataka)
The second half of Programme III presents a great one-act favourite in both the Kabuki and Bunraku repertoires in which nobody kills or gets killed and only the highest-ranking character gets hit with a stick. It’s commonly known as Kanjincho (The Subscription List).
As a schoolboy in England, I was thrilled by a showing at the school film club of The Men Who Tread on the Tiger’s Tale, an extraordinary 1945 Japanese film about real twelfth-century Japanese warriors disguised as yamabushi mountain Buddhist priests trying to escape through a well-guarded barrier gate. The original title was Tora no O wo Fumu Otokotachi, and it was directed by Akira Kurosawa.
Later, I learned the story’s stage pedigree, from the 1465 Noh play Ataka to the 1840 Kabuki version, and then on to the 1895 Bunraku version. It’s become a very auspicious piece much loved by audiences. It featured in the May 2014 National Theatre performances marking the 30th anniversary of the National Bunraku Theatre building. On that occasion the lead puppeteer for Benkei was Yoshida Tamame (now Tamao), and he will again be handling Benkei in February.
It’s interesting to see the similarities and differences of the versions presented in the different genres. They all feature the pine-tree backdrop of the Noh stage, but only Bunraku includes a change of setting. The Noh version features the most priests — between eight and ten, plus Benkei, the star. The Kabuki version has the biggest chorus with around 18 narrators and shamisen players. But in terms of the total number of performers on stage, Bunraku wins hand down, with seven main characters operated by three puppeteers as well as two single-puppeteer guards and some kurogo, plus a large group of tayū and shamsen players. But I won’t give you a spoiler on exactly how many appear or what is special about the costumes of the Benkei puppeteers.
Watch out for a real tour de force of puppeteering coordination near the end in the extraordinary Benkei sake-drinking and dancing scene followed by 40 seconds of silence.
Finally, two prints presenting unusual angles of Benkei as he pretends to read the subscription list: Kunisada’s face-on depiction from the 1840 Kabuki production (played by Ebizo V); and Yoshitoshi’s tongue-in-cheek back view from 1882. 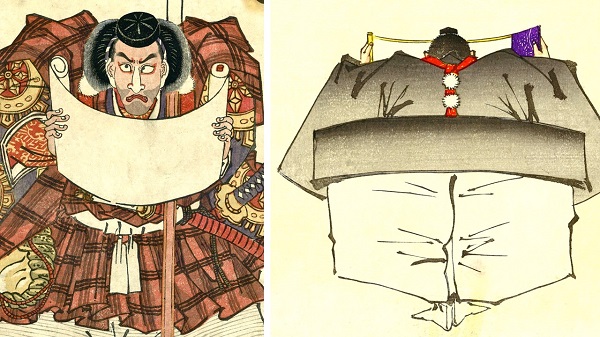